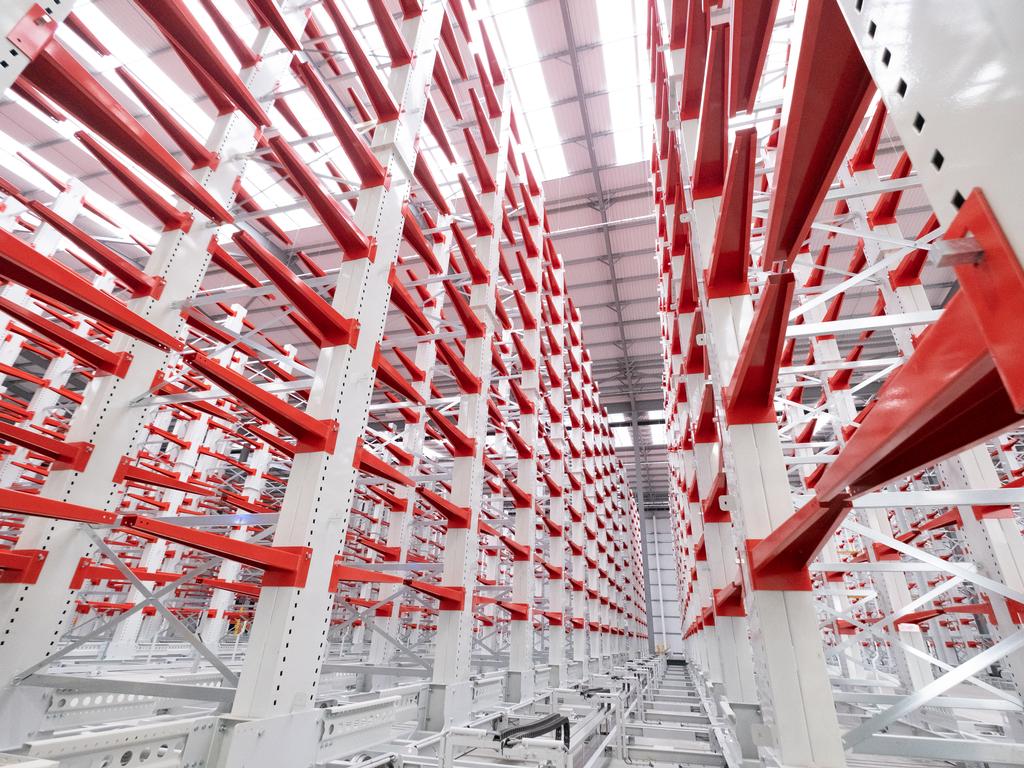 Cantilever - The racking system for special loads takes on automation

Bars, profiles, sheets, long pieces, bulky and heavy materials: certain industrial sectors have special storage needs which are all met by Cantifer, the Ferretto Group's cantilever racking system. This solution is highly flexible and can be combined with automatic picking and handling systems such as stacker cranes and mobile bases. These features make cantilever systems, such as Cantifer by Ferretto Group, the ideal solution for the efficient storage of large or irregular unit loads.

The cantilever racking system is used for storing long or bulky items. Its simple structure is made up of a series of vertical columns with horizontal arms designed to support the unit loads. The system can be provided with arms on both sides of the column for maximum storage.

Main advantages:
- long, bulky and irregular unit loads can be easily stored
- the height of all load levels can be modified with a simple operation
- a complete range of racking system dimensions and capacities is available
- the system is quick and easy to assemble.

As a result, cantilever racking systems are used in many sectors, such as:
- construction
- metalworking
- wood processing
- marble and stone slab processing.

Space to accommodate variable sizes and formats
Thanks to their flexibility, cantilever racking systems facilitate the management of available space and respond to the different needs of companies. In fact, the possibility of changing the height of the load levels allows products with different shapes, weights and sizes to be stored and the entire structure to be adapted to new needs. In this way, cantilever racking systems are ideal for storing materials such as:
- bars
- marble slabs
- metal sheets
- wood
- construction materials and PVC profiles
- industrial reels and rolls 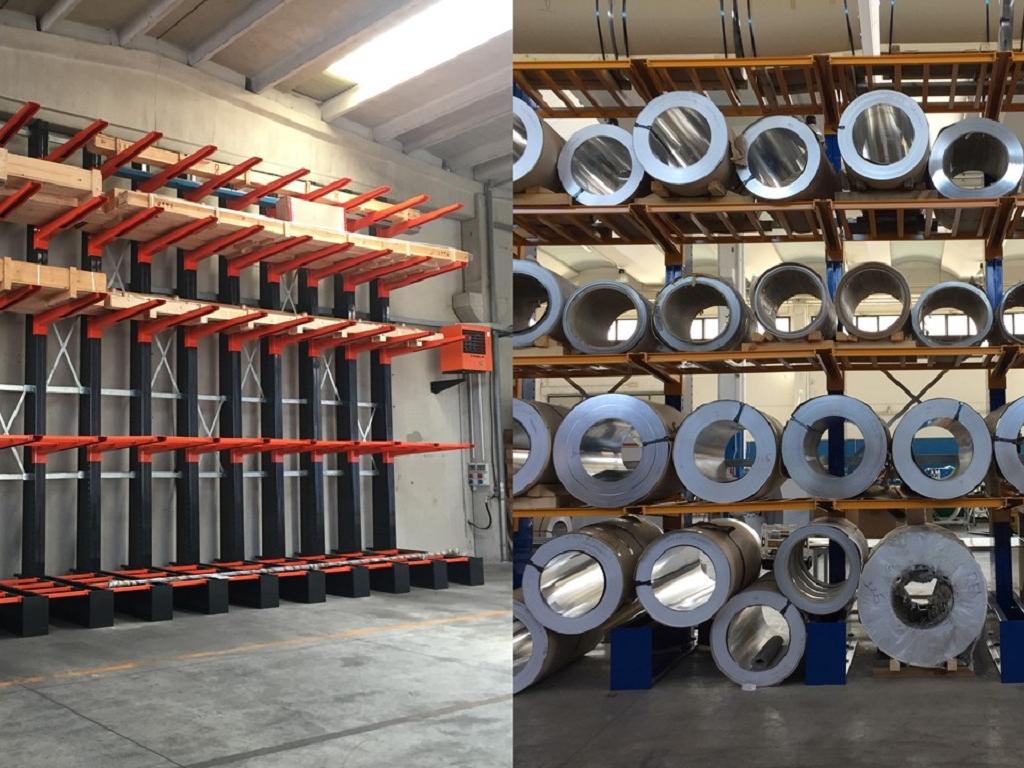 With the Ferretto Group, cantilever racking systems can also be automated

If cantilever racking systems may seem like traditional “static” solutions, they are actually often used in automated environments thanks to their integration with special picking and handling systems. In particular, automation enables better efficiency, quicker operations, greater control and precision and, last but not least, increased safety for both goods and personnel. The following are two examples of how automation helps to make the most of a cantilever racking system.

Automatic picking. The racking system can be served by stacker cranes equipped with special gripping systems. The stacker crane moves in an automated manner along the aisles and carries out the picking with no need for forklifts or similar handling equipment. On the one hand, this system ensures accuracy in picking and placing operations and, on the other, it provides maximum safety by eliminating the need for forklifts or similar equipment when handling heavy and bulky loads which are often difficult to manage.

Mobile compactable bases. To guarantee a more efficient use of storage space, cantilever racking systems can be mounted on heavy duty mobile bases. In this case, the advantage is the optimization of space: racks open and fold automatically, creating aisles for faster and easier picking of the unit loads.
Eurocell Case Study
Read more about Cantifer, the Ferretto Group’s cantilever racking system. 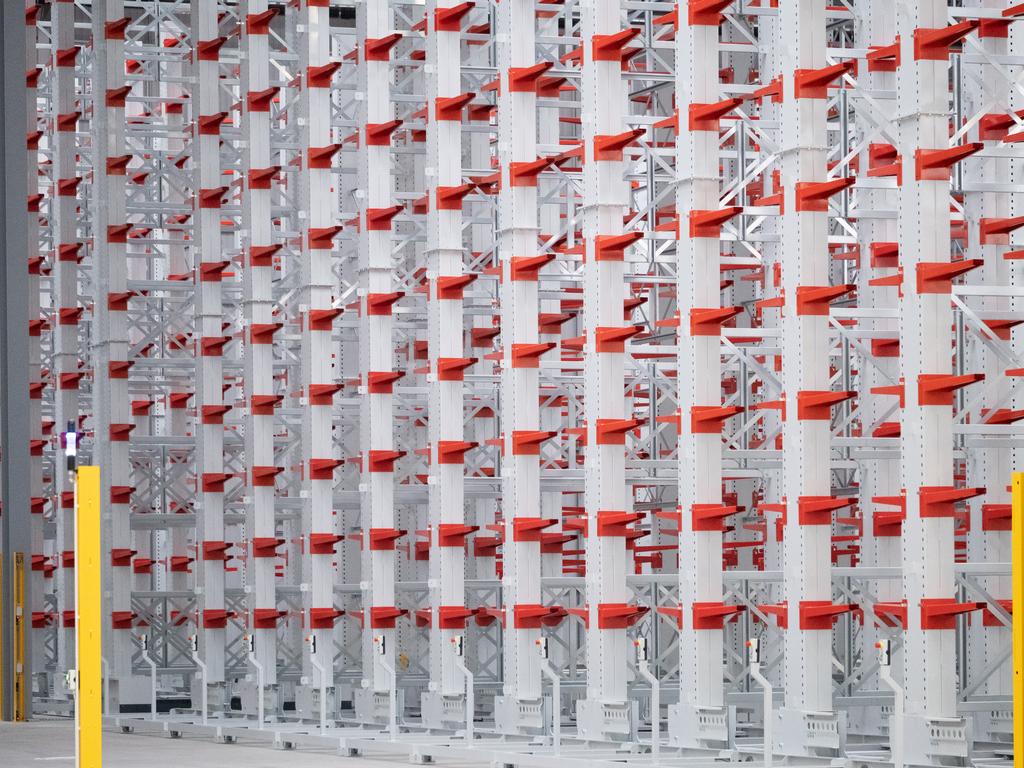